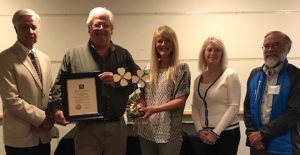 Simcoe, June 4, 2018: The 2018 Dogwood Award for contributions to Norfolk County’s culture and heritage by a group was presented to members of the Steering Committee of the Long Point Causeway Improvement Project.

“This committed group is the very best in community leadership, support and hard work,” said Melissa Collver, Norfolk’s Director of Heritage and Culture as she presented the award

The 10-year, $2.7 million project was a community-based effort to reduce the negative ecological impacts of the 3.5km causeway linking the Long Point peninsula on Lake Erie with mainland Southern Ontario. These impacts included high levels of wildlife road mortality, particularly of Species at Risk turtles and snakes, and the disruption of the natural hydrological functions of Big Creek Marsh, one of the largest remaining coastal wetlands on the Canadian side of the Great Lakes.

The project began in 2006 and was managed by a Steering Committee comprised of local concerned citizens, representatives of several local community groups, non-governmental organizations and county, provincial and federal agencies. Collectively, these people committed hundreds of hours of volunteer time to oversee this project for more than a decade. Nearly everyone on the committee lived, worked and/or owned property in Norfolk County. Notably, members of the Steering Committee who were employed by government agencies participated as volunteers outside of regular work hours.

Early in the project, it was agreed that the Long Point World Biosphere Reserve Foundation (LPWBRF) would act as the principal fundraising and administrative agency on behalf of the Steering Committee.

Because the Causeway is a Norfolk County road, the Committee and the LPWBRF worked in partnership with County Council and staff on all aspects of the project. They also consulted regularly with many regulatory agencies such as the Canadian Wildlife Service that have responsibility for protecting the Big Creek wetland ecosystem adjacent to the Causeway.

“Thanks to the initiative and hard work of these volunteer Committee members, the Causeway Project has achieved tremendous success by reducing reptile road mortality on the Causeway by nearly 80 per cent and restoring three aquatic connections between the Big Creek Marsh and Long Point Bay,” said Collver.

More than 95 per cent of the $2.7 million in funds raised by the Committee came from sources outside Norfolk County such as the federal and provincial governments, a major US conservation organization, other environmental organizations and the private sector. Much of this funding was used to purchase goods and services in Norfolk County.

Collver also noted that work of the Causeway Project Steering Committee has continued and enhanced the long heritage of nature conservation and sustainable development in the Long Point area and Norfolk County. As examples, she mentioned:

Commenting on the award, Steering Committee Chair Paula Jongerden said the group’s work brought to the forefront the concept of our responsibility to Norfolk’s very extensive natural capital and demonstrated moral responsibility to our non-human heritage.

“The true community effort and shared dedication of this group exemplifies the notion of what is possible when we work together around a very important common goal – our natural heritage,” said Jongerden.