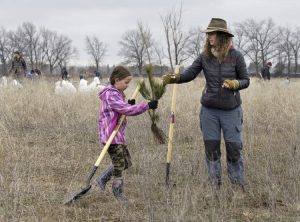 Tara Carpenter and her seven-year-old daughter Holly plants trees on Saturday on a vacant four-acre site on the west end of Simcoe. Brian Thompson/Postmedia News

SIMCOE  – A tree-planting project in Norfolk County on Saturday attracted a lot of people and organizers are delighted with the support the initiative received from the community.

“It was heartwarming to see so many people including a lot of youngsters come out to plant trees,” Tara Carpenter, of the Long Point World Biosphere, said following the event. “We had close to 100 people and the event was made possible by groups working together and it’s great to see that kind of cooperation for such a good cause.

“We planted 4,000 trees and we really needed all the people who showed up to make it a success.”

A number of different species of trees were planted on a 1.6 hectare (four-acre) parcel of vacant Norfolk County land near the end of Luscombe Drive just west of Simcoe. The initiative was part of a national effort by 14 biosphere reserves across Canada to symbolically offset the greenhouse gas emissions caused by transportation to the upcoming international G-7 economic conference in June.

The project’s aim is to plant 100,000 trees across Canada that will sequester nearly 600 tonnes of greenhouse gases as the trees grow.

“This project continues a long tradition of reforestation in Norfolk beginning with the establishment of Canada’s first forestry station in St. Williams in 1908 to more recent efforts by our foundation that collaborated in the planting of more than 1,000,000 trees by the Long Point Region Conservation Authority with financial support from Ontario Power Generation,” Rick Levick, president of the Long Point World Biosphere Reserve Foundation, said in a statement.