The Port Rowan Sewage Lagoons were 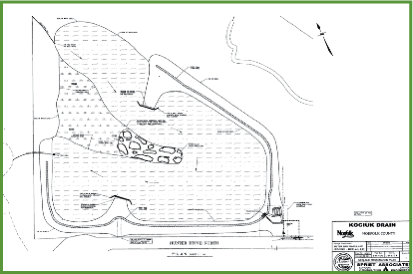 created in 1971 in order to naturally treat, store and dispose of wastewater from the town of Port Rowan. Over the years, the site has also provided habitat for numerous birds and wildlife unique to the Long Point Bay area. Commission of a new mechanical treatment facility in March 2012 allowed for the transformation of the lagoons into a functioning wetland with a riparian buffer corridor leading to Lake Erie. Traditional methods would have restored the lagoons into agricultural land, but due to the sensitivity of the surrounding ecosystems, the creation of these unique natural heritage features provided the greatest benefit to the community. The project included incorporating a viewing platform and an interpretative trail network which navigates three quarters of the way around the restored wetland, reforested agricultural lands and restored tall grass prairie habitat.

The first task of this project was the removal of many tons of soil from the bottom of the lagoon contaminated with heavy metals. Concurrently, Paul Gagnon and his team from the Long Point Region Conservation Authority worked to create vernal pools in addition to planting native trees, bushes, grasses and flowers in the acreage surrounding the lagoon. In the fall of 2014 the field west of the lagoon and south of the new sewage treatment facility was seeded with local prairie grasses, thanks to contributions by TD Friends of the Environment. It will take several years for these grasses to fully establish, but when they do, the field will be a mecca for wildlife and a delight for nature lovers.

The second phase of the wetland restoration was completed in spring of 2015, which involved the movement and removal of more earth. The berm that originally separated the two ponds was removed at both sides leaving an island, or long point. Contouring from where the municipal drain enters the wetland in the north-east around the island point and exiting in the north west through a control structure into the Kochuck drain and then into Dedrick Creek which enters Long Point Bay. Circulating the water in this way will stop the pond from becoming stagnant. The variation in the water depths will encourage the growth of different types of vegetation and attract different wildlife. Because municipal drains have been used to create the wetland, the Drainage Act will protect the entire project.

The wetland has been made to accommodate accessibility for all; from the parking, lot a ramp and gravel path enable easy access to the viewing platform, which provides visitors a better view of the wetland.

A variety of educational signs highlighting the various ecological features on the property have been placed alongside the trail. Each sign acts as an educational tool for visitors to read and educate themselves on a variety of topics including, wetland management, Ontario Species at Risk, invasive species, tallgrass prairie, and habitat restoration.

Eleven vernal pools were created throughout the Port Rowan Wetlands site. The main purpose for creating vernal pools on the Port Rowan Wetlands site is to provide breeding habitat for amphibians that will occupy the former lagoon cells in their adult phase.  A vernal pool is a temporary “pond” devoid of fish that retains water for only part of the year and typically dries up by late summer. This habitat feature is quite common in Norfolk County and is extremely important for the safe breeding and development of many native amphibian species such as; toads, frogs and salamanders. Vernal pools also provide numerous secondary benefits to the ecosystem by; acting as reservoirs for spring snow melt which also helps reduce flooding, they allow groundwater to naturally recharge which benefits rural well supplies, and they provide habitat for species of insects such as dragonflies and may also act as waterfowl nesting habitat depending on the size and duration that water remains on the surface.

A mixture of native prairie habitat grasses, sedges and wildflowers (forbs) were planted throughout the Port Rowan Wetlands site. Most of this habitat was converted to farmland by settlers, as it was far easier to clear than forests. Only small remnants exist today, and prairie is one of the most endangered ecosystems in Canada. As a result of this severe habitat loss, many tallgrass prairie birds, mammals, reptiles and pollinating insects are currently rare or threatened.  Prairie plants are also drought resistant and improve the soil as they have root systems that can grow several meters deep, and access water at depth. These roots also hold together light soils, store nutrients and reduce erosion, all of which conserves and builds soil quality and quantity.

The Tree Swallow nest boxes installed around the Port Rowan Wetlands are part of an on-going research project begun in 1977 by Bird Studies Canada and the Long Point Bird Observatory. The long-term data resulting from this research has provided many insights into how nesting success is affected by changes in climate and food supply.  Each year from May to mid-July, researchers conduct daily checks of the contents of every next box, record weather data, and measure the amount of food available through the collection of flying insects in special traps.

Ontario snakes hibernate during the winter in order to survive the cold weather. A hibernaculum is an underground chamber where snakes hibernate, either alone or communally. These could be deep cracks in rocky areas, hollow logs, mammal borrow or even man-made structures such as old wells or rock and log piles. A snake hibernaculum has been constructed here in order to bring attention to snake population decline and hopefully provide a new place for snakes to survive the cold winter months. 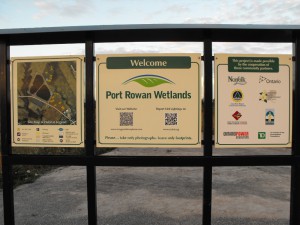 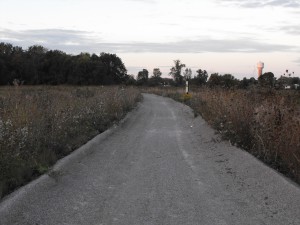 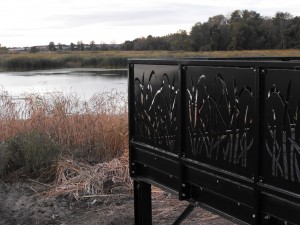 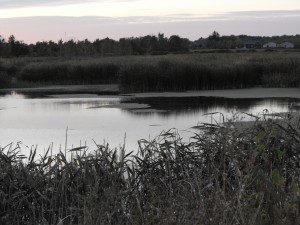 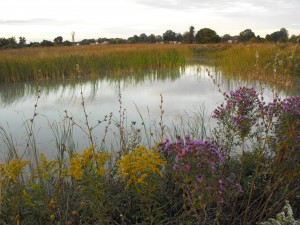 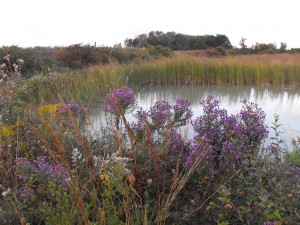